For reliably stunning animals for slaughter a hybrid captive bolt gun is presented, that has an internal radiation channel through which, after penetration of the animals skull, a high energy laser beam is emitted to induce a coagulation of brain tissue in the Medulla oblongata region, the connection between brain an spinal cord. By severing this connection, without a mechanical force, uncontrolled cramping and thereby stress for the animal is suppressed. Thus, animal welfare, meat quality and occupational safety for slaughterhouse staff can be improved. 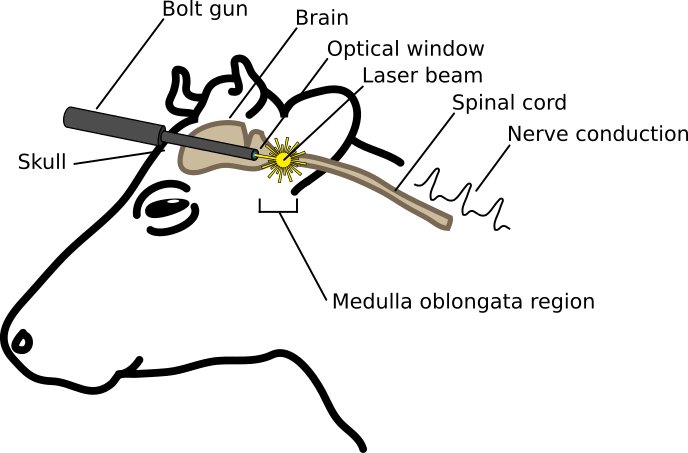 In slaughterhouses, animals for slaughter, especially large livestock such as cattle, are routinely stunned by use of captive bolt guns before the actual slaughter by bleeding. This should in particular reduce the suffering of the animals during the actual killing. Different bolt guns are available, among which are some where the bolt penetrates through the skull and into the brain and some which a non-penetrating bolt. The slaughter animal is stunned by the hit on or into the brain. Usually either bullets or compressed air are used as ammunition for bolt guns.
However, since the shape of the skull is individually designed and the bolt gun is usually placed on by hand, a complete success rate, i.e. complete anesthesia for all slaughtered animals, is excluded. Thus, there is a possibility that the animal to be killed will not be stunned efficiently. This leads to a painful slaughtering which is forbidden by German law. In addition, stress during slaughter can lead to a reduction in the quality of the meat. Another problem are reflexes (cramps) that occur. In current practice these are not prevented, because there is no interruption in the transmission of stimuli to and from the spinal cord. Therefore the muscles can become acidic, which reduces the quality of the meat. In addition, due to the uncontrolled movement of the animal during cramps, there is a not inconsiderable risk of injury for employees in the immediate vicinity of the animal. This danger is naturally greater, the larger the animal to be killed.
Before the BSE scandal, to prevent these spasms, spatula were inserted into the firing channel or gas-injecting bolt guns were used, so sever the Medulla oblongata, the connection between the brain and the spinal cord of the animal. In many countries this is no longer permissible due to hygienic concerns, since pathogens (i.e. prions in BSE) can get into the bloodstream and thus into the meat during the mechanical action. Hence, there is a need for a stunning device with high reliability, to reduce the suffering of slaughter animals and improve meat quality and protect slaughterhouse workers.

To solve the aforementioned problems a laser hybrid captive bolt gun is presented, that has an internal radiation channel through which, after penetration of the animals skull, a high energy laser beam is emitted to induce a coagulation of brain tissue in the Medulla oblongata region, the connection between brain an spinal cord. Therefore, the bolt contains an optical window at the front side, that is protected against damage by a surrounding ridge. The inside of the bolt contains a light guide. The front side window is air- and liquid-tight, so that no lymph or other contaminating liquids can enter into or compressed air can escape the bolt into the animals skull. An adjustable anchor point can be used to preset the optimal animal species-specific penetration depth, so that the bolt, when entering the brain, can reach close to the Medulla region (see Figure). The closer it gets to this area, the lower the energy or the shorter the duration of the laser pulse can be to achieve complete anesthesia. The coagulation of the Medulla oblongata region severs the connection between the brain and the spinal cord without further mechanical manipulation and can efficiently suppress nerve conduction into the peripheral nervous system and thereby prevent uncontrolled cramps. Hereby, the suffering of slaughter animals can be reduced and meat quality and occupational safety of slaughterhouse staff can be improved.

The required laser parameters were determined in an experimental study. A prototype is under development and will be tested in a cooperative project under real-life conditions.