The concept of water cleaning is particular important in the maritime area. This novel device enables the cleaning of water in in a pipe system into which an irradiation unit is inserted via an insertion module with flange connection. The surrounding water is then irradiated across the entire cross-section with a blue laser as it passes through the quartz tube, killing any microorganisms it contains. This is particular efficient because the blue laser light has a low absorption in water. While the initial application is antifouling, the method can also be used the clean drinking water.

The exchange of ballast water, which serves to stabilize ships and ensure their seaworthiness, results in an increase in marine organisms entering foreign ecosystems. The ballast water is usually taken up in coastal areas and partly discharged in the next port of destination. The entrained marine organisms displace native species and cause correspondingly great ecological damage. In addition, ships require large quantities of water to cool their engines. The water is pumped through the sea chests and reaches corresponding heat exchangers. The microorganisms in the water cause the pumps, pipelines and heat exchangers to become overgrown, thus impairing their function. Up to now, conventional ballast water treatment has been carried out in 2 stages: 1) separation of microorganisms and sediments by mechanical separation & 2) chemical or physical disinfection by killing the microorganisms.

Instead of using the established but disadvantageous methods such as the application of anti-fouling coatings or ultrasonic cleaning to prevent fouling on surfaces, the invention is used earlier and lethally damages the organisms already in the water so that no fouling can occur in the first place. For this purpose, the irradiation unit is integrated into an existing piping system, preferably at a 90° bend. The irradiation unit is inserted into the pipe via an insertion module with flange connection. The optics are located in a quartz tube and are thus isolated from the flowing water. A blue diode laser is collimated, then focused and directed in a circle into the flow tube via a conical mirror. The focus position is chosen so that it is located in the area between the quartz tube and the water pipe. The flowing water is thus irradiated in its entire cross-section as it passes through the quartz tube. Ideally, the water tube is polished in the area of the laser beam's point of incidence so that the reflection is as ideal as possible. The optical path of the laser through the water is thus doubled. The blue wavelength range is chosen because the absorption in water is very low. It is therefore possible to use compact and energy efficient laser system to reach lethal doses for the microorganisms. In the flow direction, in front and behind the place where irradiation takes place, there is an LED in each case, whose emission is analyzed by an opposite detector after passing through the water. The turbidity of the water can be determined as well as fluorescence spectroscopy for online monitoring of the organism damage process. Both can be used to control the irradiated laser power. In combination with an upstream sensor module, which provides parameters such as flow, temperature, pressure and salinity, a robust control system for adjusting the laser power can be realized. 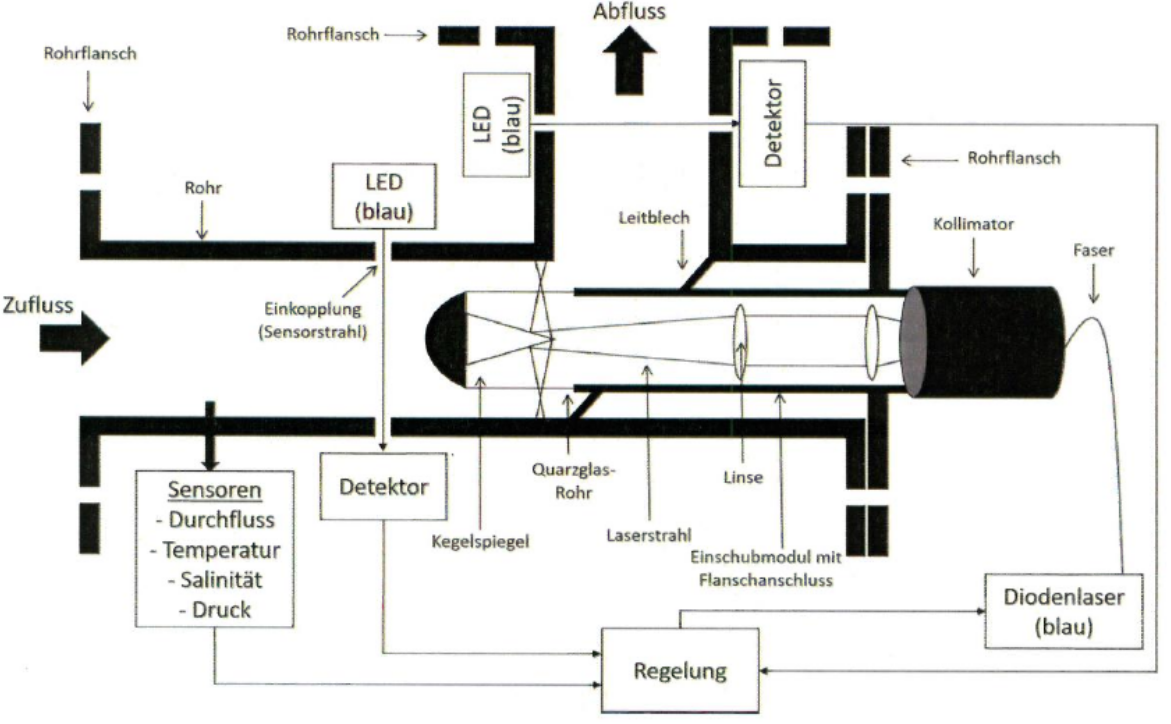 Schematic overview of the novel device for lethally damaging microorganisms in water. The surrounding water is irradiated across the entire cross-section with a blue laser as it passes along the quartz tube which houses the optics. (source: Dr. Benjamin Emde, Laser Zentrum Hannover e.V.)