Scientists at the University Medical Center Göttingen found a connection between a reduced expression level of TBX5 and heart failure based on cardiac arrhythmia. The scientists in the group of Prof. Zimmermann were able to develop a gene therapy for the prevention and treatment of a ischemic heart disease and associated complications like cardiac arrhythmia and sudden cardiac death.

More than 60% of all deaths due to cardiovascular disease are represented by out-of-hospital Sudden Cardiac Death (SCD). The T-box protein 5 (TBX5) is an essential transcription factor for cardiac development, but it remains unclear whether TBX5 in adult ventricular cardiomyocytes might play an overlooked critical role for cardiac homeostasis.
There is still a medical need for new and effective therapeutic applications for the prevention or treatment of cardiac arrhythmia and SCD.

Discovery: TBX5 protein abundance is significantly reduced in left ventricular biopsies of patients with human ischemic heart disease (ICM) and dilated cardiomyopathies (DCM) when compared to non-failing hearts (Fig.1). In contrast to the common opinion, that TBX5 is most important in the heart muscle, it was found, that the amount of TBX5 especially in the cardiac conduction system plays a critical role for a functioning heart.

Hypothesis: The decreased expression level of TBX5 in ventricular cardiomyocytes, plays an important role in the adult working myocardium.

Investigation: What is the impact of a TBX5 loss for the cardiac function and what is the therapeutic potential of a normalization of the TBX5 level in vTbx5-KO mice.

Outcome: In mice, a loss of TBX5 expression in the cardiac conduction system results in cardiac arrhythmia, causing a lethality of 50% after 150 days. A re-expression of TBX5 was achieved by inactivation of endogenous inhibitors like microRNA-10a or by enhancing the expression using e.g. CRISPR-dCas9 expression constructs. Enhancing the expression of TBX5 to physiological levels in the cardiac conduction system can be used for prevention of a ventricular heart disease and associated complications such as cardiac arrhythmia and SCD (Fig.2). Latest reulsts point to the assumption, that a treatment can also reverse damage, that was already established. 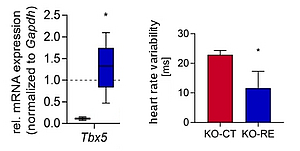 A proof-of-concept for an AAV-based gene therapy was successfully performed (animal model). The inventors are planning experiments to proove this concept in a second animal model and to verify, that already established damage can be reverted.

We have pending patent applications in EP and US. (Applicant: Georg-August-Universität Göttingen public law foundation).