Scientists of the University of Göttingen developed a transgenic mouse model for sporadic Alzheimer’s Disease (tg4-42 = TBA83). This is the first mouse model without any mutations showing neurological deficits by transgenic over-expressing a major form of amyloid beta peptides (N-truncated Abeta 4-42) found in the brain of AD patients. Abeta 4-42 was the first peptide discovered in AD-typical plaques in 1986. The neurological phenotype resembles that of mouse models with neurodegeneration in the hippocampus.

The sporadic form of Alzheimer disease (AD) is the most common form accounting for 90-95% of cases. Surprisingly, there is no animal model for sporadic AD available on the market. AD mouse models generally express mutant Amyloid Precursor Protein (APP), which liberates amyloid beta peptides. The latter are the toxic agents in AD. It is well established however that precursor APP overexpression causes a plethora of unwanted effects. APP has an established growth factor function competing with the pathological effect of Abeta.

Scientists at the University of Göttingen developed a transgenic mouse model for sporadic Alzheimer's Disease. It does not have any mutation and it shows neurological deficits by transgenic over-expression of a major form of amyloid beta peptides (N-truncated Abeta 4-42) found in the brain of AD patients. 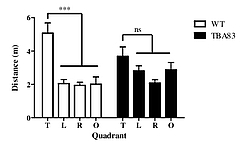 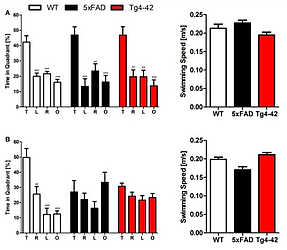 Comparison of mouse models Tg4-42 vs 5XFAD. Morris water test with female young (A) and aged (B) Tg4-42 mice (red), 5XFAD (black) mice and WT (white) littermate controls. There was no difference of the swimming speed between the groups. Both AD animal models show similar learning and memory deficits in the Morris water maze and fear conditioning tasks (Source: T. Bayer).

We sell/license this mice model.