Up to 85% of particulate matter caused by traffic is comprised of dust emerging from brake, tire or road abrasion. The present brake dust filter hood can help to reduce fine dust emission. The integrated final separator inside the hood removesthe dust containing boundary layer passively from the disc brake surface and supports ab efficient collection of fine dust into the filter media. By additional integration of a vortex generator inside the hood, the boundary layer can be removed even more effectively.

Recent studies have shown that up to 85% of the particulate matter of PM10 (particulate matter with a size < 10 µm) caused by traffic is composed of tire, brake, road abrasion or by dust being stirred up from road surfaces. The problem of particulate matter thus concerns not only Diesel engine vehicles, but also vehicles powered by petrol and electricity. According to studies of the Empa, the Swiss Federal Laboratories for Materials Science and Technology, the fine dust emitted by disc brakes alone, adds up to roughly a fifth of traffic-induced particulate matter in cities. Together with tire abrasion, a total of over 111.400 tons of dust is stirred up into the air per year in Germany alone. Especially brake dust is dangerous in breathing air, because it is composed to a great extent of particles with a particulate matter of below 0,1 µm (ultrafine fraction of PM2,5 fine dust particles), and thus it can penetrate into the lunge tissue or even enter the blood stream. Additionally, due to brake disc and brake pad compositions, they contain extremely hazardous substances such as nickel, chromium and copper.
For brake dust collection various solutions already exist, ranging from simple passive filter hoods to generator-driven vacuum devices. However, active systems usually impair the energy footprint of the vehicle, while the latest passive filter hoods are not capable of efficiently collecting the fine dust, as they are not able to effectively remove the dust-containing boundary layer off the disc brake disc surface and guide it into filters. In addition, capping of the disc brake by the hood reduces the cooling of the brake and, hence, increases the thermal stress on the disc rotor, thereby increasing the risk for failure of the brake system.

To increase the efficiency of a passive filter hood and to present an effective, passive brake dust collector that is even competitive compared to active systems, the present invention proposes a brake dust filter hood with an integrated final separator and optional vortex generator. As presented in Fig. 1, the filter hood follows the brake caliper of a disk brake and partially covers the disc rotor. In contrast to existing filter hoods, the present filter hood does not only contain simple filter mats, but is provided with a sophisticated flow control that sufficiently removes the fine dust-containing boundary layer from the disc surface. Thereby, first the flow area is decreased by air baffles and then a final separator (6 in Fig. 1B), which is shaped as a blade (7 in Fig. 1B) close to the disc surface, followed by abrupt deflections of the air flow (8 in Fig. 1B), the boundary layer is removed from the brake disc surface. The blade supports also the sealing of the hood, while the pressure changes inside the hood support the precipitation of the dust particles into the filter mats (9 in Fig. 1B).

Fig.1: Brake dust collector. A) The hood 4 that follows the brake caliper 2, covers the disc brake 1 partially and contains a final separator (A) and an optional vortex generator (B) for efficient precipitation of the brake dust generated by abrasion of both, the disc 1 and the brake pads 3. B) Horizontal longitudinal section through the filter hood 4 with the brake disc 1, the brake caliper 2 and the brake pads 3. In direction of flow (arrows), the filter hood 4 contains a vortex generator (B) and a final separator (A) with air baffle 5 and blade 7 as well as flow control in form of abrupt deflection of air flow 6 and 8. The brake dust is precipitated into filter mats 9 before the air stream exits at the end of the hood. (Source: adapted from patent application).

An optional vortex generator (B in Fig. 1A and B) can additionally support braking up the boundary layer. The vortex generator can, as a stand alone solution, in addition also be beneficial in simple filter hoods without the final separator. Especially advantages is the embodiment of the filter hood with a pretzel-shaped cross section (Fig. 2B) and a vortex generator in form of an impeller (4 in Fig. 2B). Hereby, a particularly stable vortex can be generated inside the hood, which in addition also supports the air stream inside the internally air cooled brake disc (7 in Fig. 2B), thus reducing thermal stressing on the brake system. 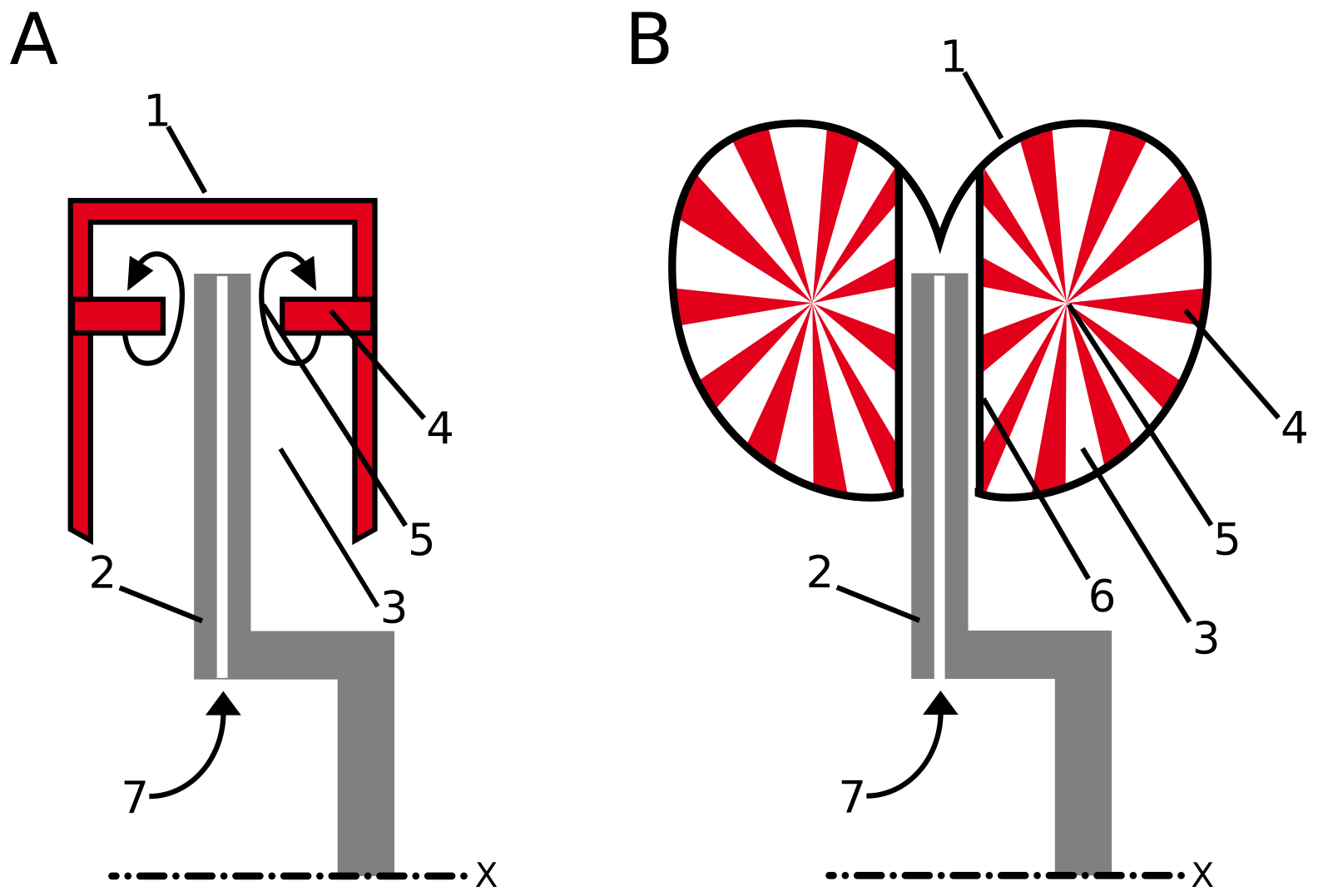 Fig.2: Cross-sectiona views through different variants of the filter hood with vortex generator. A) The internally air cooled 7 brake disc 2 is covered by the filter hood 1. Inside the flow channel 3 wing-shaped vortex generators 4 are position on both sides of the brake disc 2, to generate vortices 5 the brake up the boundary layer on the disc surface. B) Pretzel-shaped filter hood 1 with vortex generator in form of an impeller. The wings 4 of the impeller are positioned inside the flow channel 3 and connect in a center spot 5. Along the brake surface of the internally ventilated 7 brake disc 2 the wings are connected to an air deflector 6. (Source: adapted from patent application)

A first prototype is in development and will soon to be tested in the university-belonging wind tunnel.