Hybrid plasma-laser micro-structuring provides a tool for treating fused silica without the need for a time consuming preconditioning of the surface or the use of expensive vacuum-UV- respectively mid-wavelength-IR-lasers. The use of a hydrogenous plasma prior to the ablation process causes a temporary increase of the absorption in a more easily accessible wavelength region. 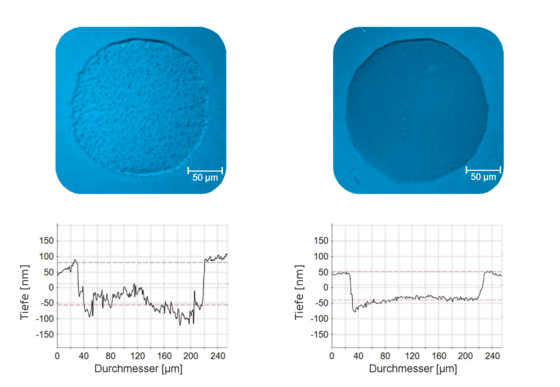 Fused silica after conventional laser ablation treatment (left) and after the herein introduced Hybrid Plasma-Laser Micro-Structuring (right). It can clearly be seen, that both contour accuracy and surface roughness are improved by the hybrid technique. (Quelle: W. Viöl)

Laser ablation is a surface treatment method and is preferably used to remove thin layers or drill narrow holes. As elegant as this technique might be, it demands a sufficient absorption within the treated material or surface. Fused silica however is almost transparent in a range between 200 nm and 2000 nm where laser ablation is usually carried out. As of today there exist two possible solutions to bypass this disadvantage: On the one hand one can add a layer with a higher absorption coefficient onto the transparent surface before ablation but has to make sure that this layer can be completely removed afterwards. On the other hand it is possible to decrease/increase the laser wavelength beyond/above absorption threshold or amplify the energy density of the laser beam. Both solutions increase efforts and thus costs.

Compared to conventional laser ablation, the proposed hybrid technique allows for an effective and inexpensive way of treating fused silica surfaces. To achieve this, the combination of a hydrogenous plasma and a laser is used. The surface to be treated is brought into contact with a forming gas which reduces part of the near-surface SiO2 into silicon suboxides and also incorporates atomic hydrogen deeper into the structure. As a result, the wavelength dependent absorption is increased by more than a factor of 2 (see figures below). After the laser treatment is finished, the initial index of refraction can be restored almost completely by simply tempering the object for several hours.

The proposed technique is suitable for fabricating diffractive optical elements and for micro-structuring of fused silica in general. Hybrid-Plasma-Laser-Ablation can also be applied to remove surface contamination or to anneal surface defects.

The process has been successfully tested in the laboratory.