Scientists at the university Göttingen were able to design a platform for a gene therapy where the therapeutic protein is not expressed at all without an activator molecule, where expression is fully reversible and can be fine tuned. This allows for individualized gene therapies, reduces the threat of side effects and upgrades gene therapies to a new level of precision medicine.

Gene therapy in its current use is irreversible and does not allow controlled transgene expression in case of side effects. Only few regulated vector systems are available. Popular Tet-operon based systems show undesired immunogenic problems. Two vector systems, originally developed for safety control, are unlikely to be approved for human gene therapy.

It can be build with:

In vivo proof of an efficient gene therapy for Parkinson's Disease (PD) using astrocytes as hosts for localized neurotrophic factor delivery has been achieved. The expression is achieved by a viral vector with enhanced tissue spread. The studies showed that astrocyte expressed glial cell line-derived neurotrophic factor (GDNF) provides in vivo restoration of motor performance in a clinically relevant lesion paradigm (Molec Therap 2012, 20, 534-543).

An in vivo adeno-associated virus (AAV)-mediated, Mifepristone-regulated Gene Switch system for the transgene expression of glial cell line-derived neurotrohic factor (GDNF) in the rat brain/CNS has been achieved. However it showed considerable background expression in the non-induced state (Molec. Therap. 2013, 2, e106). 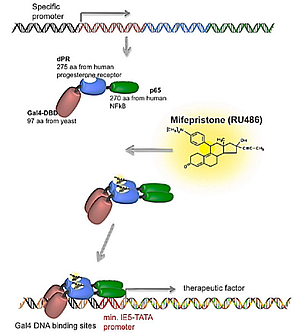 The system is activated by binding of the activator molecule being the synthetic small molecule steroid mifepristone (Mfp) to ta truncated human progesterone receptor, which is fused to a human p65 transactivated domain and a yeast Gal DNA-binding domain. Upon binding of Mfp to the Gene Switch (GS) fusion protein, it dimerizes and binds to a polynucleotide sequence consisting of several GAL4 DNA binding sites. Consequently, the p65 moiety of the GS fusion protein recruits the basic cellular transcription machinery, allowing expression of the therapeutic factor from a minimal promoter. Withdrawal of Mfp disables binding of the GS fusion protein to its DNA target sequence, and thus cease transgene expression. The system is suitable for neurotrophic factor-based gene therapy.

Several different configurations of a one-vector GS-GDNF layout were designed, which were packaged into AAV-5 viral capsides and tested in the rat brain for GDNF production in absence or presence of Mfp. Table 1 shows GDNF levels obtained from rat brains before and after induction with Mfp. Lead candidate is #21.

Moreover, at four weeks after Mfp induction, GDNF levels in rats injected with AAV-5 #21 at 1.10e9 vg had returned to background levels again. To our knowledge, this is the first description of any regulated gene transfer system in AAV vectors with zero background expression in the non-induced state, and the first functional one-vector genome layout of the gene switch system in a AAV vectors.